Set in a futuristic Japan, the government has enforced a new justice system known as the Sibyl System. The system is used to scan and analyse the population’s brain wave patterns for any criminal intent. The data is then converted into a ‘Crime Co-efficient’, a number used to determine one’s threat, and if the law is required to enforce any legal action. Inspectors (intelligence agents) and their Enforcers (people with high crime co-efficients that are only allowed back into society to help track and eliminate other criminals. Essentially seen as hunting dogs) are part of the Crime Investigation Department (CID) – the department responsible for managing crime.

Psycho Pass follows the story of Akane Tsunemori, a new inspector to the CID, as she navigates the law enforcement system, and begins to question her understanding of justice. Right, let’s get into the review – please be warned that there are spoilers ahead. 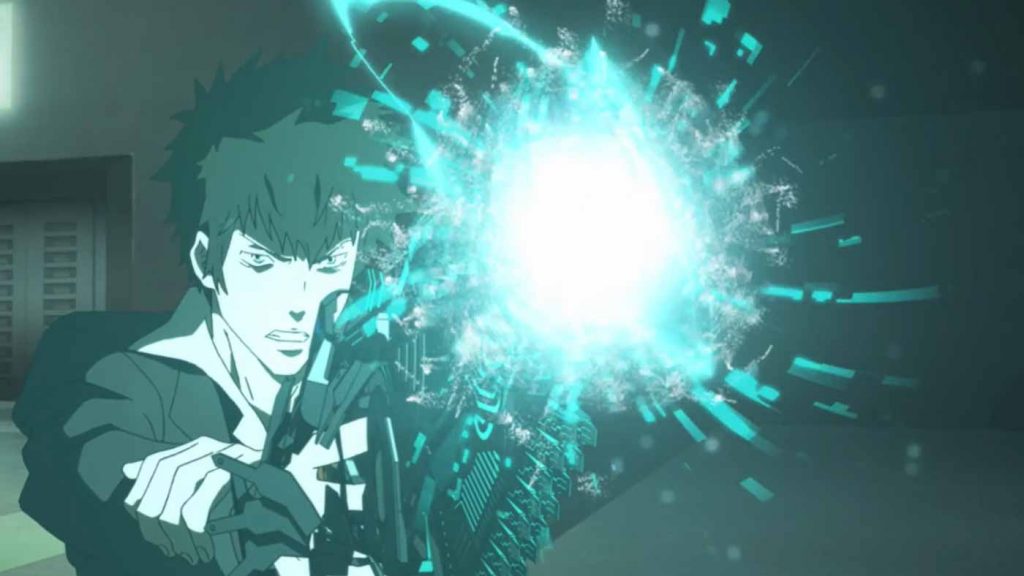 Psycho-pass is not of the weak of heart. There is gore. There is tragedy. There are dark themes to provoke thoughts on justice, morals, freedom and lots of other heavy-topic conversations. There’s a lot of commentary made on human behaviour, free will, technology with constant references and homages to a number of famous authors – Philip K Dick, William Gibson, Nietzsche, Joseph Conrad and George Orwell.

The plot starts off as your standard crime/thriller styled show, and turns out to be so, so much more. What seems, at first, like the series will be about a string of random crimes, turns out to be pieces to a larger scheme. It’s so intricately woven, and I have the highest appreciation for the way that this story was told. 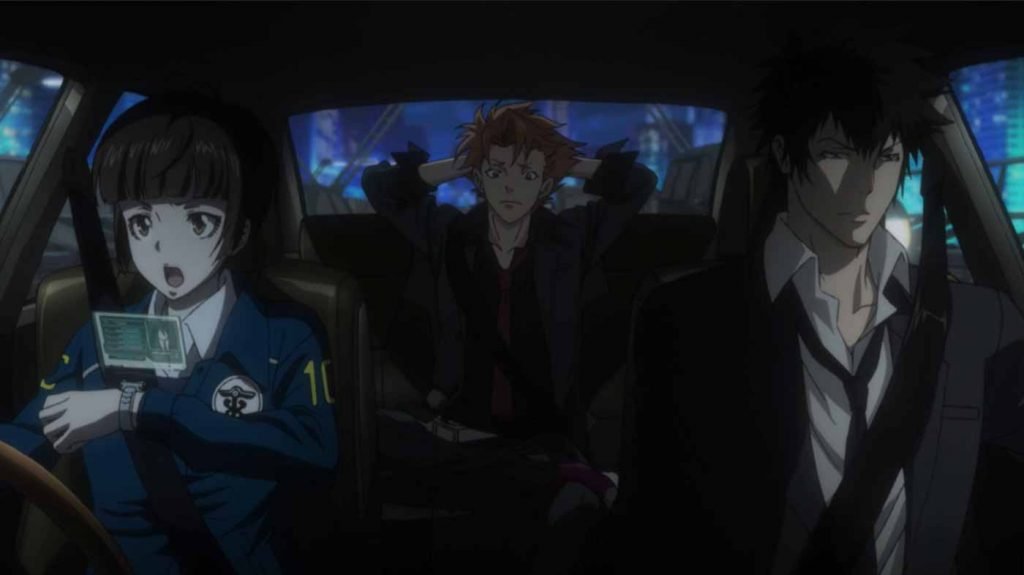 I also love the fact they discuss reasons behind what they do – why humans are still responsible for running the Sibyl system, as a failsafe.

Now, Gen Urobuchi, the scriptwriter for this season, is a true master of capturing characters. Any one who is quick to make judgement of these characters in the first few episodes can’t appreciate the complexity and delicate blend of the personalities (and to be honest, have probably missed the point of character development). It was a gift. Each character blends so well together – from the group of misfits, the team dynamic, the government hierarchy, the turbulent questioning of justice and motive.

Take episode 11 for example, when Akane’s friend gets held captive by Makishima, my mouth hit the floor when Akane was unable to save Yuki, making her question her faith in the Sibyl System. This scene is so exceptionally cruel. 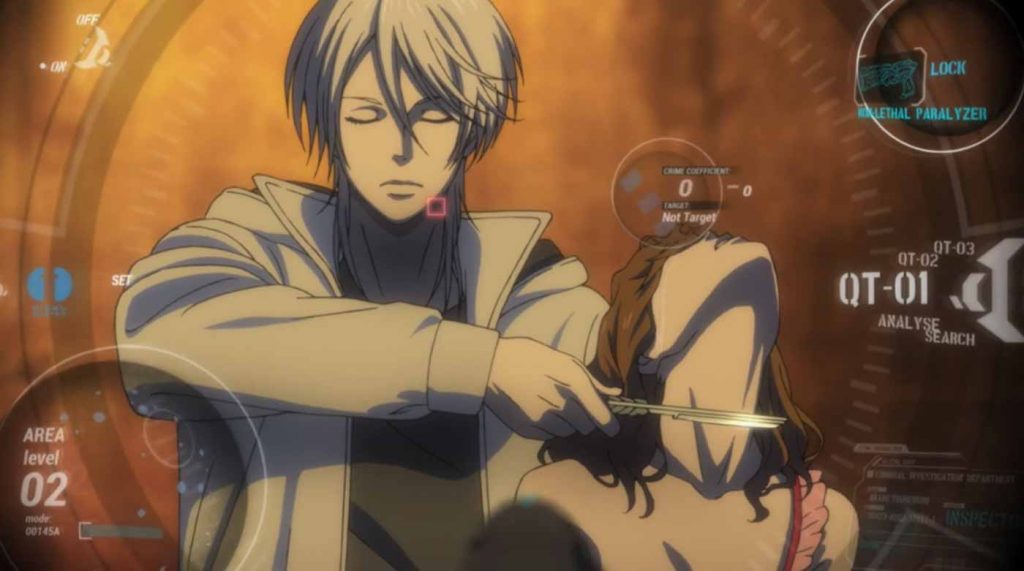 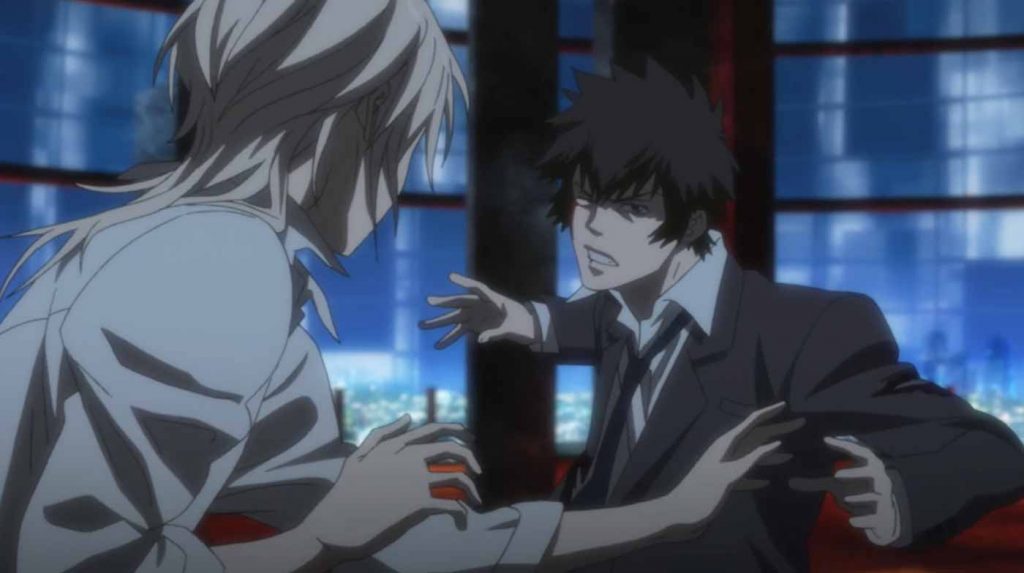 The characters are incredible. From their design, their personalities, and of course, their character developments! I’m looking at you Ginoza. Just wow *chef finger kiss* amazing.

I love Shogo Makishima – I think it’s common knowledge by now that he’s my favourite villain of all time. He’s just so… deliciously evil. I love a villain whose motive isn’t black or white, but covers the entire catalogue of grey; one that when their point is made, you end up questioning if they really had a point. The complexity  between Kogami and Makishima, and their chemistry, was done brilliantly. Makishima’s appreciation and respect for Kogami as an opponent (when he warned him about the Sibyl system, and telling him that it was not worth risking his life for) is so bittersweet. I also thought that the way Makishima was written, his ability to manipulate, was second to none. We know that he is extremely intelligent, but we also know that he is physically strong and capable to commit murder/crime/something horrible, but he simply manipulates others to do the dirty work because of his understanding and appreciation for the human psyche. He’s just SO BRUTAL! He truly made the series for me.

Akane gets a hard wrap, and people seem to be quick to judge her. She gets called naïve, and I think that’s an incorrect accusation. It’s the neccessary evil when it comes to story writing – the main characters need to have growth, and that’s exactly what Akane did.  She went into this job with a sense of justice, and ends up having all she believes challenged and is forced to really review what she believes is right and wrong.  In episode 14, you really see her beginning to seriously question the system, and from then on, we see Akane grown into an assertive young woman with grow a back bone.

The other side characters were entertaining, and I loved them too. Kagari was great and the comic relief that we needed throughout this dark series. 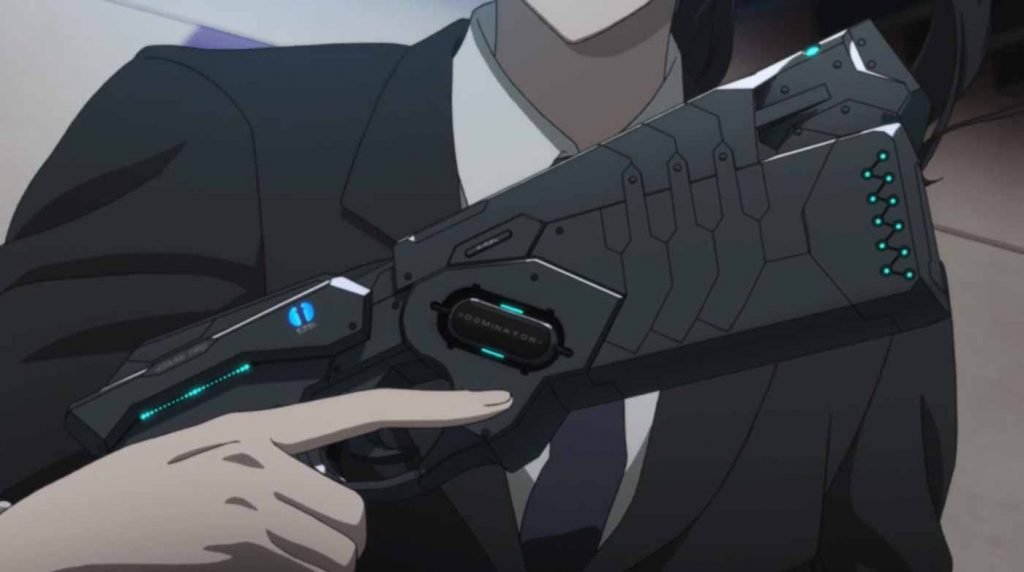 The tech that’s used in Psycho Pass is next level. The use of holograms to change outfits, or interiors is something that I wish was real. Their watch phones were also before their time (did Apple get their inspiration from this? The series was released 2 years before the first Apple Watch… )

The little robot assistants that scan the crime scene and log all the evidence were pretty neat. It’s the small details like this that really added to the overall enjoyment of Psycho Pass, and satisfied my Cyberpunk fix.

The dominators are possibly one of my favourite weapons – I think they are seriously badass. One of the best elements to it is that it has its limits and restrictions, it has flaws. I think there are too many shows that have weapons with unstoppable power, or outrageous abilities that suddenly take , but the Dominator? It’s like your all-in-one weapon with AI system. Even the paralyser setting has enough power to hospitalise if shot carelessly at the person, which is displayed throughout the series each time that Kogami gets hit.

The art is great, and really suits the dark themes. It’s edgy and feels grungy when it needs to really capture the violence of the show. The score was also fantastic, I enjoyed the synth-style music and thought it was a great addition. I also thought the piano piece at the end of episode 22 was perfect and so fitting for the final scene between Kogami and Makishima.

To me, this season set the quality bar so high that it’s pretty much perfect in my book. I have so much appreciation for the story, and the characters of season 1 that I fear anything that follows would be a disappointment.

Psycho Pass is a wonderfully dark and heavy twisted tale. The music, the art and the concept are amazing, but I think that the true allure is in the characters and their development. 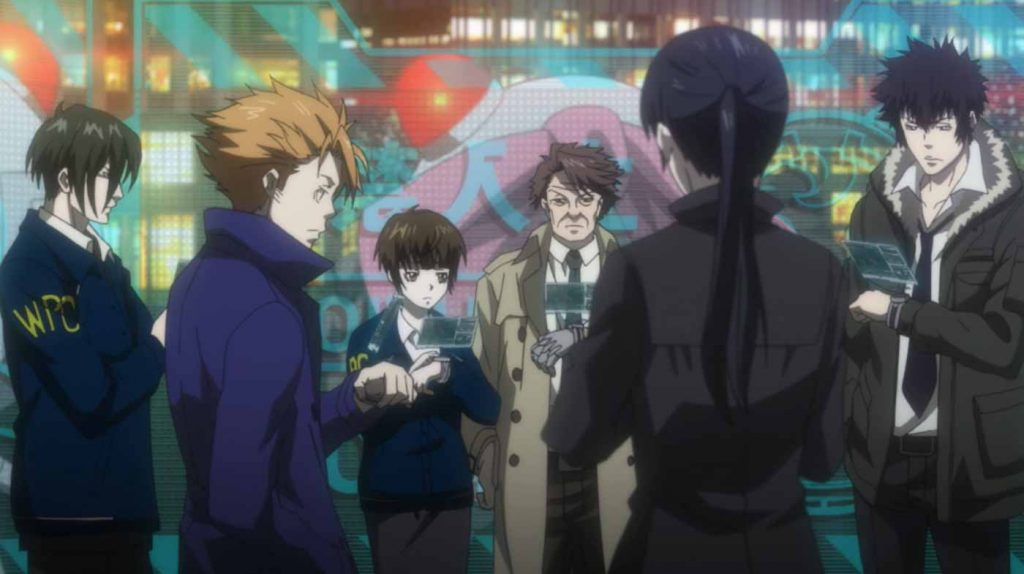 Find us on the following socials